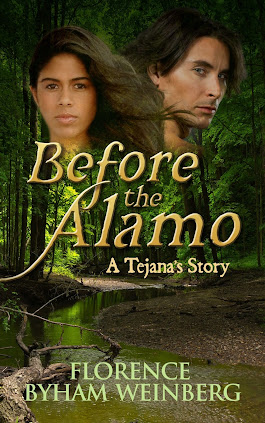 Emilia Altamirano, half Otomí Indian, half pure Spanish, is born in 1814, the year after the Battle of the Medina River, where her father fought as an officer in the Mexican Royalist Army. She grows up in Bexar de San Antonio unacknowledged by her father, raised by her Otomí Indian mother, and “adopted” as an unofficial ward by José Antonio Navarro, hero of the Texas fight for independence from Mexico. She learns to read, write, and acts as a page for the Ayuntamiento (City Council). She learns nursing during a cholera epidemic and later tends the wounded on both sides during and after the Battle of the Alamo. She survives, but as a Tejana, Spanish-speaking, and a loyal citizen of Mexico, she faces an uncertain future.

PRAISE FOR BEFORE THE ALAMO

“Yesterday, I finished Before the Alamo, figuratively gasping for breath…Thank you for a joyful experience, so helpful in this time of disillusion and anxiety.”
—reader Marti Nodine
CLICK TO PURCHASE!

Clueless Gent’s Rating for Before the Alamo

Every once in a while a book comes along that fills in some of the blanks that you didn’t even know existed until reading it. This is such a book, and I feel that I am now keenly more empathetic to some things than I was before reading Before the Alamo. In my opinion, only exceptionally-well-written historical fiction can fill in these voids.

The title could not be more on point! When I first saw the book, I began to wonder about Texas life before the Alamo. Was there really a “before the Alamo” period that carries any significance at all? I probably didn’t have a very good answer to that question before, but I do now.

Even though the historical implications of this book are huge – at least to me – the story is also quite wonderful. And sad.

The story follows the early life of Emilia Altamirano. She is fictional, as are all the main characters, but she comes in contact with a number of people that actually appear in Texas history books. She is born to an unwed mother in 1814, when the story begins. She is not conceived out of rape or incest, which was very common back then, but is the product of a brief love affair between her mother, an Otomí Indian, and a man of Spanish (think Spain) birth.

The story follows her life up to 1836, the year of the infamous battle. During those years, we see Emilia’s struggle to learn how to read, and more importantly, the implications – and ramifications – of her lineage.

There is also an epilogue that occurs in 1848 letting the reader know where Emilia ended up and what course her life is taking. Including that Epilogue is not the only really cool thing this author did. She also included a List of Characters, including both main and minor characters. In that list, the author also indicated whether a character was fictional or historical. For me, that added tremendous value to this story. It also made me aware of just how thoroughly researched this story is.

“Emilia from the beginning had felt cold terror lurking in the pit of her stomach, as if the Angel of Death hovered over her but was biding his time.”

Another thing the author did that really impressed me was include an appendix, titled A Brief History of Béxar de San Antonio, that highlighted historically significant and relevant events from 1718 to 1847. I read that before reading the story, and it put everything into perfect perspective.

The description is top notch. As an example, this is how the author described what a character found when he entered Béxar: “…he found a peaceful and beautiful welcome: the surrounding fields rippled intensely blue with bluebonnets, accented here and there by the orange-red of Indian paintbrushes. Trees, too, were in bloom: redbuds, leafless as yet, but glowing with lavender-pink buds, and in dense groves, mustard yellow banks of the huisache had rejoiced his soul. Yes, it was definitely early April.“

Since most of the characters did not speak English, the author interspersed some Spanish in the story, presumably to add to the realism. The author did a fine job with this. It wasn’t overly done, and she usually followed it up with the English version. Here’s an example from the story: “I’ll be cooking la comida, the midday meal, soon.”

Something else that really stands out is the character development. It seems to me that the author took her time in crafting the main characters. As a result, in additional to realism of all the main (fictional) characters, the reader also becomes aware of the social placement of people based on the tint of their skin and the origin of their blood.

This was a real eye-opener for me. Also, when the Anglos arrived in the area, I was taken aback by the way they treated the people who were already living there! (True, that wasn’t the first time it happened in history, nor was it the last, but it was still just as disconcerting.)

Just in case you’re not sure yet, I’ll go on the record and say that I enjoyed this story immensely. Thoroughly researched! Well written! Well edited!

Do you know what happened “Before the Alamo?” Here’s your chance. I hope you take it.

I received a free copy of Before the Alamo from Lone Star Book Blog Tours in exchange for my honest review. Opinions expressed are my own. 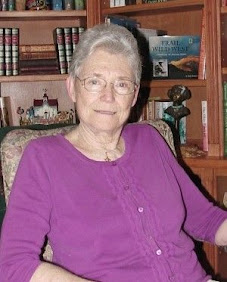 Florence Byham Weinberg, born in Alamogordo, New Mexico, lived on a ranch as well as a farm and travelled with her military family during World War Two. After earning a Ph.D., she taught for 36 years in three universities. She published four scholarly books. Since retiring, she has written four books in the Pfefferkorn historical mystery series, three additional historical novels and one philosophical fantasy/thriller. She lives in San Antonio, loves cats, dogs, horses, and conversations with great-souled friends. 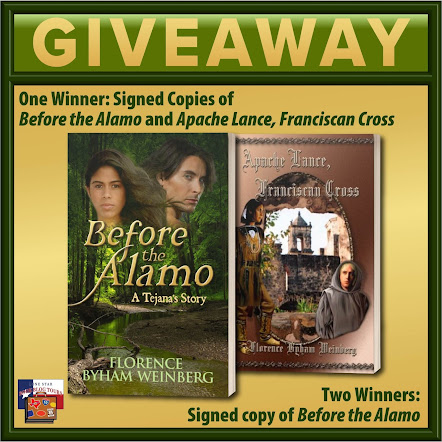 2 thoughts on “Before the Alamo”