The series, If a Butterfly, is a bit like Six Degrees of Separation from Kevin Bacon (if Kevin just happened to be a butterfly). A Monarch butterfly, during its epic migration from Canada to Mexico, intersects the paths of a few people, and their lives and the lives of others are altered forever.

In Chrysalis, the first book in the series, nine different characters embark on a variety of journeys, some of distance, and others while staying right where they are. What do a scientist, a married couple on a vacation, a woman who hears voices no one else hears, a grad student, a quilter, a radio deejay, a teacher, and an astronaut all have in common? A butterfly, of course. All of these characters want what most people want, “to earn a decent living, be respected for the work we do, have a good time, and get along with everybody.” Sometimes that happens, sometimes it doesn’t.

In the second book, Emergence, the journeys continue, with a different focus for some of the characters because of what happened in Chrysalis; but the continuation of their stories show how each of our lives can touch another life, and what effect a chance encounter can have on everyone around us.

How has being a Texan influenced your writing?

I wasn’t born in Texas, but my mother was. We moved here two months after I was born in Ohio. My parents met there. They were both stationed at Wright Patterson Air Force Base during World War II. After we moved here, though, we moved again. And again. All over the U.S. and for a couple of years in Canada. We finally moved permanently to Texas when I was in the 2nd grade, and I’ve been here ever since. Nearly everything I’ve written has been at least partially set in Texas (including If a Butterfly, which also roams all over the country and into outer space). Where you live becomes a part of your state of being, your way of thinking, so it would naturally find its way into someone’s writing.

Where did your love of books and reading come from?

My parents started reading to me when I was still in my crib, so I was reading on my own by the age of three. Not picture books, Hardy Boys, Tom Swift, things like that. By the first grade I was reading authors like Robert Louis Stevenson and Sir Walter Scott, and then later I moved on to science fiction like the War of the Worlds and The Time Machine. It seemed like every decade or so after that I brought a new genre into the fold. Now I read a wide variety of fiction and non-fiction. Hopefully that range of literature helps inform what I write.

How important are names to you in your books? How do you choose names?

Names are very important. Once I get to know my characters, I often play with their names to achieve the right sound and the right balance between them and the other characters, but at first I choose them randomly. In the If a Butterfly series, for example. I was already in the middle of writing the first draft when I realized I had named three of my female characters Sally, Stella, and Stephie. That would likely have been confusing for the readers.

What did you do?

I changed two of the names, so now they’re Stella, Laura, and Jasmine (who goes by Jas). Sign up for my mailing list and get the free companion book to the series. It covers all of that and a whole lot more.

Why are you releasing Chrysalis and Emergence simultaneously?

I was recently asked why I was releasing both books in the If a Butterfly series at the same time. Yes, it’s customary to release one book first and then make the reader wait a year or more to read the next in the series, but I hate waiting. Both books are ready now. Why shouldn’t they both see the light of day at the same time?

What projects are you working on right now?

I have two books that are partly finished. They are both mystery thrillers. One of them, The Hawthorn’s Sting, is set in England and France, beginning 22 centuries ago, and continuing through until modern day. When I first started writing it Brexit was just an idea. Now that Brexit is a reality I may have to do a lot of revision of the modern scenes to make it work, so Hawthorn is gently simmering on the back burner.

The other book, Murder Between Friends, takes place in my fictional Central Texas town, Deep Springs, and takes place over the span of a few weeks. It’s a murder mystery, and is the one I’m devoting most of my attention to right now. The murdered person was someone most of the town hated. The best anyone can seem to say about him is “good riddance,” which makes the main character’s job quite a bit harder since he’s a reporter trying to find out who killed the guy. In a small town it’s likely that quite a few people have an idea who killed him, but no one seems to care about outing the murderer. The fact that the reporter’s ex-girlfriend is the dead man’s widow also adds another layer of complication to everything. I’m hoping to finish it sometime next year.

What is your favorite quote?

I guess it would have to be Yogi Berra’s “In theory, there isn’t any difference between theory and practice. In practice, there is.”

A close second would have to be Stephen King’s “Fiction is the truth inside the lie.”

What one or two pieces of advice would you offer any not-yet-published authors?

Writing as a profession is hard work. Don’t give up, though. Words that don’t get written never get published.

Do you have a mantra for writing and/or for life?

Show up, do your best, and be true to yourself. 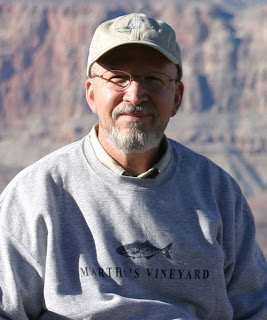 Michael Sirois, after graduating from the University of Houston with degrees in drama and English, taught writing, drama, and technology in a Texas middle school for two decades. He still wrote, though, placing well in competitions like the Writer’s Digest Short Story contest and the HBO Project Greenlight series. He has published two books prior to this series. A novel, The Jagged Man, is temporarily out of print; but Aggravated, a non-fiction book about unjust incarceration, is still available.
An excerpt from If a Butterfly was chosen for publication in the Rice University’s Continuing Studies Writer’s Gallery in 2006, and a different excerpt from it won second place in the Gutsy Great Novelist’s Page One Prize in 2020.
Michael does know his characters. He has either done the jobs of his main characters (teacher, actor, radio deejay, tech geek); had direct connections to others (quilter, scientist, grad student); or wished he could have been one (astronaut). He has, however, never experienced some of the things that at least two of the characters had to go through in this novel. He won’t name names, but he’s very happy about not having to do any of that personally. 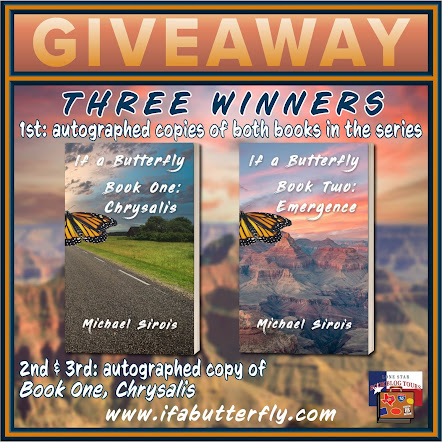